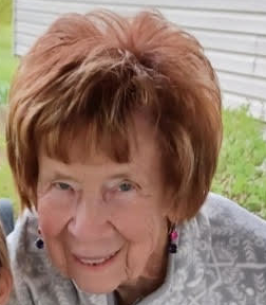 June Follin of Perkasie had passed away on Tuesday January 10, 2023 at St Luke’s Hospital in Quakertown. June was 88 years old. She was the wife of the late Vernon Follin.

Born in Philadelphia, June was the daughter of the late Charles and Elizabeth (Conboy) Rhodes.
June had been employed as a Title Clerk and had work for many agencies in the area.
June was involved with the following organizations the Eastern Star, Nile, & Garden Club. She also participated in Bible Study & Wow.
She enjoyed gardening and being around family and friends.

June is survived by her son; Bryan Follin (Karen) and her sister Betsy Guy (late John). She was the grand mother of Bryan R.(Amanda) Follin, Christina (Matthew) Williams, Kevin (Jessie) Follin, and Bridget (Jarek) Carney. She also is survived by her greatgrandchildren Alexis Follin, Alayna, Daniel, Ethan Gutherman, Gavin, Ashley, and Tyler Williams, Reid, Elizabeth, and Jacob Carney.
June’s Funeral Service will be held at 7:00pm on Wednesday January 18, 2023 at the Shelly Funeral Home Easton and Keller's Church Road Plumsteadville. The family will receive friends from 5:00pm until the time of service. Internment will be held privately.

In lieu of flowers memorial contributions may be sent to Shriners Hospital.