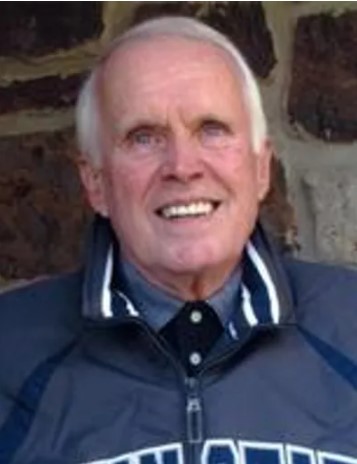 Robert R. Hart, Sr. of Solebury Township, PA, passed away on Tuesday, April 12, 2022 at the Lower Bucks Hospital in Langhorne, PA. He was 82 years old.

Born in Trenton, NJ, Bob grew up in Morrisville, PA. A gifted athlete Bob graduated from Morrisville High School where he excelled in football and track. He was a dedicated teacher, coach and school administrator. A health and physical education teacher, Bob first taught at Neshaminy High School where he also served as assistant football coach. Later he joined the faculty at Delhaas High School in Bristol as head football coach. In 1975 Bob became the head football coach at Bensalem High School. Under Bob’s leadership, Bensalem’s 1979 football team won the district championship. In 1978 Bob was named the Delaware Valley National Football Foundations Hall of Fame Coach of the Year. Bob also served as Bensalem High School’s disciplinarian, director of athletics and assistant principal prior to retiring in 1999. Bob’s support and encouragement to his students and athletes did not end with graduation. He touched the lives of many young people who continued to seek his advice and treasured his friendship. Bob earned his undergraduate degree in health and physical education from Penn State University where he was a four year football letterman. He earned his master’s degree in education from Rider University.

Bob was an active member of Thompson Memorial Presbyterian Church in New Hope. He was also a member of the Masonic Lodges in Trenton and Amwell. A dedicated volunteer at the Masonic Home in Burlington, Bob brought fellowship and comfort to the residents in the center’s Alzheimer’s unit. He loved nature and the outdoors.

Bob was dedicated to his family. He is survived by his beloved wife of 58 years M. Elizabeth “Betty” Sauder Hart; his daughter Dr. Kelly Hart and her spouse Wendy Keller of Brunswick, MD; his son Robert R. Hart, Jr. of New Hope; his sister Loretta Whiteside of Morrisville, PA; his brothers and their wives Lewis and Carolyn Hart of Yardley, PA and Richard and Jeanne Hart of Syracuse, NY. Bob was predeceased by his parents Lewis Tage Hart and Margaret Rose Lumio Hart and his brother-in-law Keith Whiteside and his friends and mentors Joe Paterno and John Petercuskie. Bob touched many lives, relatives, friends and students. A special friend to Bob and his family is Heidi LoStracco of Bensalem.

Memorial services will be announced at a later date.

Arrangements are under the direction of the Van Horn-McDonough Funeral Home, 21 York Street, Lambertville, NJ 08530 (vhmfh.com).