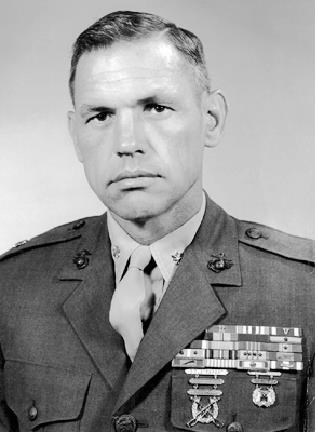 BAGGETT Robert Lee "Bob", LtCol USMC (Ret.) 86, died September 25, 2017, surrounded by his children. Lifelong learner, unfailing optimist, avid outdoorsman and a devout Baptist who enjoyed the occasional rum cocktail. He was the son of the late Lyman Thomas and Johnnie Wallis Baggett of Paducah. Bob was the widower of his beloved wife of 50 years, Jean Stevens Baggett of Bowling Green. Upon graduating from Paducah Tilghman, Bob enlisted in Marine Corps in 1949, one of 7 brothers who served as Marines. He served in the Korean War. He graduated from Western Kentucky Teachers College (now WKU) where he was on the track team, and received an MA from Murray State University. Bob returned to active duty as a 2nd Lt. in 1956, and commanded various infantry units including 2nd Reconnaissance Bn. He was awarded the Vietnamese Cross of Gallantry by President Nguyen Van Thieu in 1966 and the Bronze Star in 1971. Upon retirement from the Marines, Bob was a farmer and a history teacher at several high schools in central and western Kentucky and with the UK Community College system. He was a member of Calvary Baptist Church, and a former volunteer for Meals on Wheels. He is survived by sons Jim Baggett and Joe Baggett, Lexington; Jack (Heidi) Baggett, Ashburn, VA; daughter Leesa (Keith) Moorman, Lexington; granddaughter Annabel Moorman, Boston, MA; grandson Atticus Moorman, Brooklyn, NY. Funeral service will be 10am Friday at Calvary Baptist Church. Bob will be interred with military honors next to Jean at the Kentucky Veterans Cemetery West in Hopkinsville on Saturday, September 30 at (2pm) CST. Visitation will be from 7-8pm Thursday at Kerr Brothers Funeral Home-Main St. Gifts in his memory may be made to Meals on Wheels. Fair winds and following seas, Grampy.