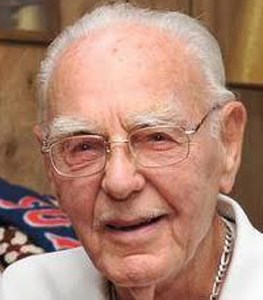 David J. Becker, age 95, a longtime Braintree resident, died suddenly, Tuesday, January 28, 2020 at home. David was born in Philadelphia, Pa., to the late William J. and Clara (Fischer) Becker. He was raised and educated in Trevose, Pa. He had lived in Braintree for the past seventy-two years. David was a decorated, disabled World War II veteran, having served in the U.S. Army's 78th Infantry Division. He received the Purple Heart for wounds received in the European Theater on March 20, 1945, which resulted in the amputation of his right arm. David also received the Bronze Star, Good Conduct Medal, European African Middle Eastern Service Medal, World War II Victory Medal, and American Campaign Medal. David served as chief of the prosthetics and sensory aid service at the VA Outpatient Clinic in Boston, retiring in 1972 after twenty-six years of service. In retirement, he enjoyed organizing monthly luncheons for former VA employees in Greater Boston. He was instrumental in the 1950s campaign creating special license plates for Massachusetts veterans. In 1991, he founded the 1958 Cadillac Owners Association, comprised of nearly one thousand members globally. Dave was also a talented craftsman and enjoyed working on his home. Most of all, he was devoted to his family. Beloved husband for over fifty years of the late Edith B. (McNutt) Becker. Devoted father of Christine M. McEnaney of Dartmouth, Robert J. Becker of Braintree and his girlfriend Jennifer Hautala, and the late David J. Becker, Jr. Loving grandfather of three and great-grandfather of six. One of ten siblings, he was the brother of William R. Becker of S.C., Edward A. Becker, Mary E. Becker, both of Calif., and was predeceased by six. Dave is also survived by his companion, Constance "Connie" Shaw, and many nieces and nephews. Funeral services will be conducted at the Sweeney Brothers Home for Funerals, 1 Independence Avenue, Quincy on Tuesday, February 4, at 11 a.m. Relatives and friends are invited to attend. Visitation prior to the service from 10-11 a.m. At the request of the family, private interment services, with military honors, will take place at the Massachusetts National Cemetery in Bourne at a later date. In lieu of flowers, donations in David's memory may be made to the New England Center and Home for Veterans, Advancement Office, 17 Court Street, P.O. Box 845257, Boston, MA 02284-5257. You are invited to visit www.thesweeneybrothers.com or call 617-472-6344.