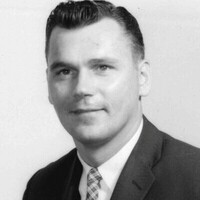 Born in Corydon, IA. He graduated from Temple University with a degree in Pharmacology in 1954. He joined the US Army, and was a member of the 101st Airborne. While he was stationed at Ft Benning, Columbus, Ga, he met his wife, Thelma (Woodham) Garrett. The couple resided in Levittown since 1968. Bobby and Thelma were married for 62 years before her passing in 2019.

Bobby was a huge fan of NASCAR, and enjoyed watching the Philadelphia Eagles on Sundays.

Bobby is survived by his children, Cheryl L. Maximuck (Matthew) and Robert D. Garrett (MaryLouise). He was the proud grandfather of 4 and proud great-grandfather of 3. He is preceded in death by his brother, David Garrett.

Visitation for family and friends will be held on Tuesday, January 24, 2023 from 9:30 until 10:30 am, at the James J. Dougherty Funeral Home, Inc., 2200 Trenton Road, Levittown. Interment will follow in Washington Crossing National Cemetery, Newtown.

In lieu of flowers, memorial contributions in Mr. Garrett's name may be made to Guardians of the National Cemetery, PO Box 233, Newtown, PA 18940 or www.guardiansofthenationalcemetery.org.