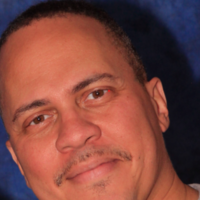 Steven ‘Bunky” Broderick Walls was born June 16, 1964 to James and Jacqueline Walker Walls. He was the oldest of three children. He graduated from Bensalem High school in 1982. He followed in his father’s footsteps and attended Lincoln University, in Oxford Pa, where he earned his Bachelor’s degree in Business Administration.

In High school, Bunky took a music class, where he started to learn the keyboard. This was just the beginning. After spending many family reunions in Oxford, listening to his aunts and cousins play the piano and sing gospel music, he decided it was his turn to take the stage! Music was his true passion!

While at Lincoln, he attempted to move away from his childhood nickname, Bunky to become Steve and was successful with almost everyone but family. We told him he will always be “Uncle Bunk”.

Over the years, he worked in the newspaper and Banking industries but found his fit in Security. This was no surprise to friends and family who are very familiar with his surveillance and “Booby Trap” inventions. He also moonlighted as Lead singer with the band “Final Cut”, worked as a sound man and roady for many years.

For the past 30+ years, he has continued to collaborate and write original music with his closest friends/Brothers, Devearl and Elliot. They communicated almost every day, and usually several times a day. If to just say hi or to have a “Jam Session”. Bunk would break into song, at the drop of a dime. He truly embodied the phrase, “wrote a song about it…, wanna hear it…, here it goes…” He brought smiles to everyone’s day.

Steve/Bunky is survived by sisters, Stephanie (Walls) Jones and Charlotte Walls, Brother in law William Scott Jones, Niece Dominique Rene Jones and many cousins and close friends. He was a beloved brother, uncle cousin and friend.