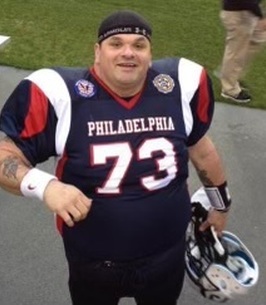 Joseph F. Ruggiero Jr. left this world too soon on March 5, 2022.
“Big Joe” was raised in Bensalem, Pa by his parents, Joseph F. Ruggiero Sr. and Nancy Ward Miller. He was a graduate of Bensalem High School, having wrestled and played football. He was a former assistant wrestling coach for Bensalem and Neshaminy High Schools. Joe “Pizza Man” was inducted into the Bensalem High School Hall of Fame in 2018 for wrestling. Joe was well known for being a dedicated firefighter. Joe was one of the first members of Bensalem Fire Rescue. He was a proud lifetime member of Cornwells Fire Company, having served as both Chief and President. He also ran with Nottingham Fire Company. He loved playing football for the Blue Flames. After his retirement from firefighting services, he worked at Bensalem School District.
Joseph is survived by his parents, Joseph F. Ruggiero Sr. and Nancy Ward Miller, sons, Joseph D. Ruggiero and Colin Ruggiero, granddaughter, Lilliana B. Ruggiero, brother Anthony Ruggiero (Janet), and his nieces and nephews. He was preceded in death by his sister, Nancy C. Kelly.
Relatives and friends are invited to attend Joseph’s Viewing at the Tomlinson Funeral Home, 2207 Bristol Pike, Bensalem Pa 19020 on Saturday, March 12th from 9:00-11:00 AM followed by his Service at 11:00 AM. Interment will take place at Resurrection Cemetery.